I am honored to serve the needs of couples from all faith traditions, spiritual paths, life philosophies, cultures and backgrounds. The common theme of all ceremonies, is they are a celebration of a couples' love for one another, no matter the faith, lifestyle, sexual orientation, background, or culture.  It's all about Love!
1 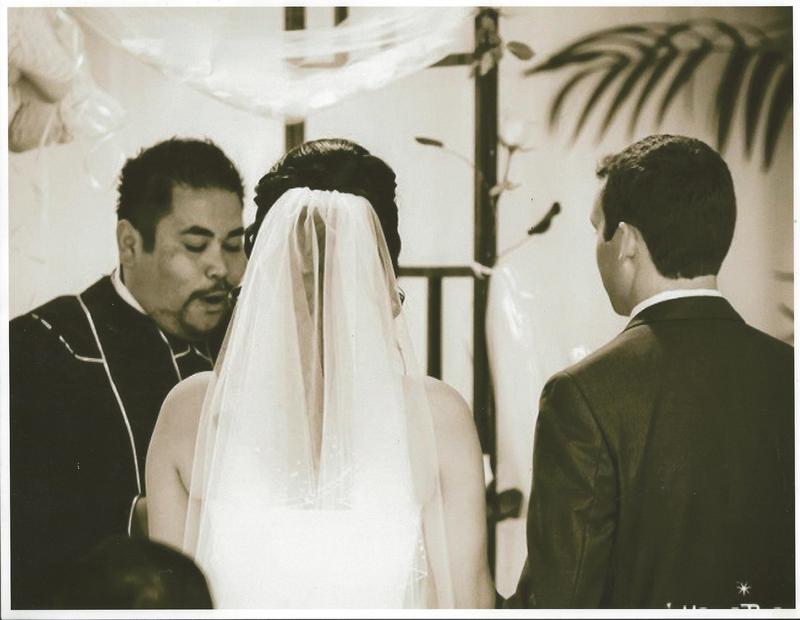 Serving Couples Who:
•Want something meaningful, special and representative of who they are.
•Need a bilingual ceremony, English/Spanish.
•Are divorced or belong to a organization that does not accept their lifestyle.
•Want to include their children and/or their parents in their wedding ceremony.
•Have a non-traditional wedding location. Example: Backyard, Yacht, Beach, Helicopter etc...
•Would like to incorporate their personal stories into their wedding ceremony.
•May want to have a variety of customs in their wedding ceremony such as the sand ceremony, blessing of the hands, glass breaking, cup of wine ceremony, unity candle, unity circle, blessing of the rings, Native American readings and traditions or many more options that are available.
•Are of different faiths and want to blend the wedding customs of their faiths or prefer a neutral spiritual civil wedding ceremony.
•May not belong to a church, synagogue or other religious organization.
•Want a civil/secular wedding ceremony with no reference to religion.
•Are a Non-Traditional couple.
Types of Ceremonies Explained
ROMANTIC CEREMONY--- It's all about love! This ceremony has a touch of traditional with a few modern twists, a slight Spiritual tint (or not!) and an emphasis on lots of love and romance! It's all about love!
BI-LINGUAL CEREMONY --- (bilingual or mixed)
Ceremony may be officiated in one language, bilingual or mixed. It means that you may select to have all in one language, in two languages or have only parts of the ceremony in two languages. We are also open to co-celebrants or interpreters, for languages that we are not fluent in. It works very well and it is very special for the couple and the guests.
SPANISH CEREMONY---is a wedding performed in Spanish either completely or just parts of the wedding ceremony in Spanish and part in English (bilingual). May include cultural elements such as the Arras and Lazo. If you would like all or part of your ceremony in Spanish just let us know.
FILIPINO CEREMONY---is a traditional ethnic Filipino Ceremony, including such cultural elements as the Cord, Coins and Veil.
SPIRITUAL CEREMONY---"Spiritual" means different things to different people. Most often, in a ceremony context, it is either the religious, sacred or divine feeling or essence underneath a religious element, ritual or tradition. Often it uses beautiful, inspiring words but is universal and stays away from any particular religion
NON-RELIGIOUS---No religion in the ceremony whatsoever, including no prayer (although a couple may have an invocation or poem that would be as meaningful to them as a prayer would be to a religious person). It is also known as a court house, notary, JP or Justice of the Peace ceremony. Please note that a non-religious or civil ceremony can have absolutely as much meaningfulness, warmth and heart as any other type of ceremony. Non-religious or civil means no religion, but still just as full of love.
RELIGIOUS CEREMONY---of a particular denomination (e.g., Catholic, Jewish, Muslim etc.) or combination of denominations; characterized by formal or defining religious elements/rituals/traditions from one or more denominations.
MULTI-CULTURAL CEREMONY---similar to interfaith except it involves combining or blending of a couple's cultures and heritage; may or may not have any religious elements--can be civil or non–religious.
INTERFAITH CEREMONY---is also known as a multi-faith or interdenominational. A combination or blend of religions ranging from only some religion to being entirely religious.
RENEWAL / REAFFIRMATION OF VOWS ---A reaffirmation ceremony is a time of thanksgiving and assessment of a couple’s years together. It is a strengthening of their commitment to each other. The ceremony can be personalized to reflect the trials, tribulations and joys of the marriage. Children and grandchildren can be mentioned and included. Hopes for the future can also be expressed. The event can be informal, warm and personal, as it is a celebration of years spent together and a renewal of promises for the future.
SINGING OFFICIANT WEDDING CEREMONY --- A musically inspired wedding ceremony. Parts of the Ceremony may be sung by the Wedding Officiant.
NON-DENOMINATIONAL CEREMONY--- A non-denominational ceremony does not include specific or defining traditions and is not of a particular denomination.
Optional Ceremonial Touches Include: Click Here
Length of A Ceremony: We can create a ceremony that is not too long and not to short. A (20-30 minute) ceremony is about the average length of ceremony that creates memories for a lifetime.
ELove Ministries
Divine Ceremonies
Officiant Peter Otto
Wedding Minister Peter otto
Rev. Peter Otto
Reverend Peter Otto
orange officiant
orange county officiant
burbank officiant
glendale wedding officiant
ELove Ministries
Divine Ceremonies
Officiant Peter Otto
Wedding Minister Peter otto
Rev. Peter Otto
Reverend Peter Otto
orange officiant
orange county officiant
burbank officiant
glendale wedding officiant
Serving Los Angeles, Orange County, San Bernardino County, Ventura County, San Diego County, Riverside County, And Beyond!
All Couples and Beliefs Welcome. Non-Denominational -Civil · Romantic · Interfaith - Traditional · Contemporary
Wedding, Commitment Ceremony, Unions, Vow Renewal and Public Speaking Engagements
Bilingual English/Spanish Ceremonies
Please Contact Via Contact Form or Call 626.551.8434
© 2008-2020 by Officiant Peter Otto. All Rights Reserved
Hablo español.
The Wedding Officiant | Peter Otto
1